Shabana Rehman will comment on July 22 trial, for NRK

- Everyone is affected by 22 July, says writer and social commentator Shabana Rehman. As a representative of an average citizen of Oslo, she will comment on 22 July trial. 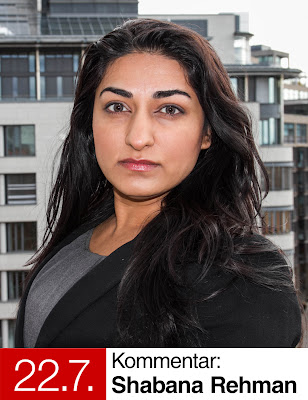 Shabana Rehman says she hopes to be part of the people's voice as she follows the trial of Behring Anders Breivik. She will write a weekly comment on NRK in connection with what is happening in and around the trial.

She says she will follow the trial closely and uncensored from various places. In court, from abroad and from the streets of Oslo. She will participate in online debates and be active on social media.
- I want to convey what happens in the courtroom and beyond. This may be the great social settlement in our time. Not because of Breivik, but because of all the lives we lost, says Rehman when we meet her at the Oslo courthouse where the trial takes place over the next ten weeks.

- A man with no regrets

- I want to emphasize what people say and think in terms of what we are going to face in Breivik's own explanation. What is it that causes people to make extreme statements. I think this trial is going to trigger both right and left extremes, says Rehman.
She says a lot has happened and much has been said since 22 last July.
- For me the only thing that stands firm on Monday that it is a man in the courtroom without remorse. It is there the trial begins. It is the most painful and distressing, says Rehman.
- It will be the toughest course for those who are directly affected and their families, but as a nation we were all characterized by the horror that happened, regardless of ethnicity and religion. What happened, the background to the events and how it is explained is our common grief, she says.
- Breivik case is going to present us with some facts about our society. So it becomes our task to look these facts be interpreted extremely or humane, says Rehman.

Shabana Rehman was in Akersgata in Oslo when the bomb exploded in the government quarter. She says the course has affected her since.

- I know some facts and extreme ways to interpret the facts related to multiculturalism on. I have commented regularly for years, says Rehman.
- The topics are difficult, and it is important for me to take people seriously. But we must always have a humane dialogue. Breivik's extreme world view is characterized by the opposite. There have been people hostile and violent. And it exists in our society, she said. Breivik chose to put words into action.

- I think the trial is going to shape our self-concept further. For it is then it will be put into words what happened. Also the foreign press, which will follow closely how the military treats many characterize as a monster, says Rehman.

NRK said Shabana Rehman is asked to comment 22 July-trial because she she largely represents an average Oslo citizen and because she has many years experience as a social commentator and writer.
- Most of Oslo lies somewhere in between different cultural and ethnic backgrounds. Whether one is from a multicultural background, or you are related or know someone. Shabana Rehman has foot in all camps and experienced as well as being in the city center when the bomb slammed on 22 July. She has extensive experience in commenting and debating the type of issues that will arise in the course of the trial, says editorial director for NRK news online editorial Morten Stensland.

- My most important task

The experienced writer admits that the trial and the work of the comments are going to be tough.
- But this is probably the most important thing I will do as a writer, she says.
- Regardless of how we will be affected by this trial, we will continue to live together. The case Breivik shows us how wrong things can go if we do not take a common responsibility towards extremism, says Rehman.
Posted by Shabana Rehman at 6:32 AM